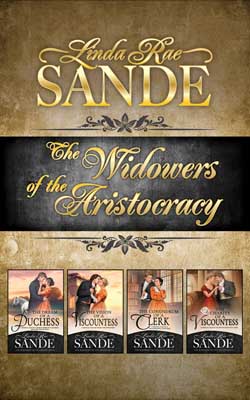 The Widowers of the Aristocracy

When Isabella believes she has witnessed her mother's murder at the hands of her father in THE DREAM OF A DUCHESS, she rides off to London in search of the man her mother always said she could go to in case of trouble. To keep her safe, Octavius, Duke of Huntington, agrees to hide Isabella in his country estate—and to allow her access to his stables and horses. But what about his heart?

When archaeologist Jasper, Viscount Henley, is caught kissing Marianne, he marries her despite knowing she's nearly blind. Determined to show his new bride the wonders of the Roman world as part of his next expedition—their wedding trip—Jasper will do whatever it takes for her to see more clearly, even if his own vision is clouded by a revelation in THE VISION OF A VISCOUNTESS.

When the headmistress of London’s premiere finishing school dies, her son, Theodore Streater, is desperate to find a replacement. He’s a bank clerk and has no idea how to run a girl’s school. So when Daisy Albright appears to apply for the position, he hires her on the spot—even though he would rather hire her as his mistress. Left with only one arm from the last war, Teddy would prefer to take a wife, but who will marry a one-armed man? A former spy, Daisy has a secret she’d rather her employer not know, especially as she grows more fond of him. When she discovers what Mrs. Streater had already arranged on behalf of the school, though, her future employment and the fate of the school will be at risk in THE CONUNDRUM OF A CLERK.

What is real and what is fiction when it comes to Viscount Marcus Lancaster's life? A widower, he's imagined a life with Charity, a widowed countess, and he's determined to make it become a reality. Never mind that the matchmaker wants nothing to do with marriage. But she does have a secret desire in THE CHARITY OF A VISCOUNT.