"The Brothers of the Aristocracy" Book 2 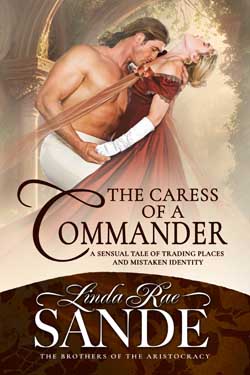 I Love Romance Review 5 stars
Linda Rae Sande writes stories that are prevalent in any day or age. Her stories are penned with understanding and at the center of each and every one of them is heart. The Caress of A Commander is a story of determination on the part of one man Will to reunite with his one great love. Will stops at nothing to discover the whereabouts of the keeper of his heart. Along the way he recruits his brother to help him in his absence. I received a copy in exchange for an honest review. The Caress of a Commander is the story of two brothers searching for their destinies as they navigate love, loss, mystery and society. I am loving the dual story format and as always the sensuality and sensitivity she brings to the table with every read.

The Caress of a Commander

Funny how romance can complicate even the simplest plans…

Now that his time with the British Navy is done, Will Slater has only one mission. He will find Lady Barbara. They only had one night together before he left London, but his heart will always belong to her. So, he’ll discover why she disappeared from Society—and from his life—if it’s the last thing he ever does…

Barbara needs help, not love. Banished and destitute, her prospects are bleak. The last person she expects to come to her rescue is Will. She lost faith in him long ago. How could she possibly forgive the man who ruined and abandoned her?

Meanwhile, Will’s lookalike bastard brother has issues of his own. Stephen had been more than happy to charm the ton in his brother’s name while Will chased Barbara. But then he meets the lovely Victoria and everything changes...

As Will fights for a second chance with Barbara, and Stephen wonders if Victoria will want him when she discovers who he really is, only one thing is certain. The path to happily ever after will not be an easy one.

The Caress of a Commander, a sexy, angsty, secret pregnancy, mistaken identity Regency historical romance, is book 2 in The Brothers of the Aristocracy series, but can be read as a standalone. It features two alpha heroes who aren’t afraid to go after what (and who) they want, and two strong heroines who demand (and command) respect…and pleasure. Download today and get ready to fall in love with your next favorite series.

Lucida took a step to the left to avoid a palm frond that seemed determined to rest on her shoulder. Frowning, she wondered how long it had hovered there, ready to reach down and latch onto the tulle and satin sleeve of her white ball gown. Once it had attached itself, it would be nearly impossible to free her sleeve from its grip, the rough edges entwining themselves into the tulle so she might be forced to take a leaf home with her. Even as she regarded the tip of the frond, it seemed to sway in her direction as if it sensed she had moved away.

“It appears as if this palm tree has decided to claim the next dance with you. Perhaps you’ll grant me the one after that?”

Lucida’s eyes widened when she looked up to find the Earl of Bellingham looking down on her, mischief apparent in his hazel eyes.

For a moment, Lucida was left speechless. Obviously, the earl had paid witness to the palm moving in her direction just as she suspected it had done! Perhaps he had even seen its frond fondling her shoulder!

And now he had come to rescue her!

“I actually gave the palm my apologies only a moment ago,” she replied with a roll of her eyes. “He was being rather too friendly given we’ve never been properly introduced,” she explained as she angled her head. “And now I fear he didn’t take it well,” she added, moving a few inches farther away from the insistent frond.