"The Sons of the Aristocracy" Book 1 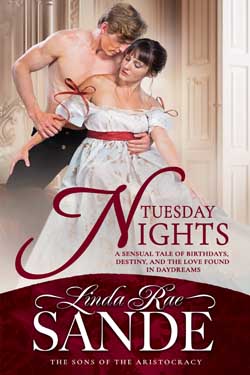 If every man is a master of time, then what of the man who forgets to keep track of it?

The second son of a viscount and a bare knuckle boxer, Michael Cunningham is more interested in building his fortune than spending time at the Marriage Mart. But long ago he promised his mother he would get married "if not before, then on the eve of my twenty-eighth birthday". Now, with only a few weeks until the auspicious occasion, Michael finds himself in a rather awkward situation. He's forgotten his next birthday is his twenty-eighth birthday.

Reminded of the impending birthday by his sister, a duchess, Michael realizes he has much to do in the three weeks he has to keep his promise – not the least of which is to secure the only woman he has ever considered for a wife – the younger daughter of his business partner and the very woman his sister has just hired to be a governess for her children!

The duchess will rescind her offer to Olivia in exchange for having her as a sister by marriage. But there's no time for courtship, no time for banns to be read, and certainly no time to wait for a wedding to be planned once he has asked for Olivia's hand.

His sister has the perfect plan, though. In order for Michael to meet his mother's deadline and ensure a quick marriage, she insists he must ruin Olivia!

Olivia has felt affection for her father's business partner since he first rescued her from a would-be rake at sixteen. But the gentleman never indicated a romantic interest in her during his frequent visits to her family's home in Shipley. So imagine her shock when he climbs into her bed on a Tuesday night and is discovered by her father and some servants! Ruined, indeed!

Now married and living in London, Michael is sure Olivia despises him for what happened, while Olivia is quite sure her husband has feelings for her sister and wandered into the wrong bedchamber.

Will a week be enough time for Michael to court his new wife and convince her of his affection? Or will he regret his effort to accomplish too much in too little time? Only time will tell in "Tuesday Nights".

Harold gave him a nod. “Have you read The Times from last ... Wednesday?” he asked, pausing a moment to confirm the date of the paper spread out next to his breakfast plate.

Michael shook his head. “I have not,” he answered quickly, thinking he had several days’ worth of papers to read. “Not more bad news, I pray?” he wondered, a worried expression darkening his face.

When Harold nodded in Olivia’s direction, Olivia took the cue to mean she was to speak. “Over in the States, a Mr. David Melville was granted a patent on an apparatus he developed to create coal gas,” she stated evenly. “Are you familiar with his work, Mr. Cunningham?” Olivia kept her gaze on Michael, well aware that her sister had just rolled her eyes and was displaying an expression of boredom. Eloisa had no interest in matters of science.

Michael considered Olivia’s words, nearly interrupting her with a request to call him ‘Michael’. They had known one another for several years now. She might be his wife some day. If so, they would spend their mornings much like this, sharing news over breakfast, making plans for the rest of the day. Perhaps they would ride through Hyde Park during the fashionable hour. Have dinner under the crystal chandelier in the dining room at his townhouse. Drink port and claret in the library afterwards. Share a bed for the rest of the night in a room lit by a single candle.

There would be no need for coal gas in his bedchamber.

He was suddenly conscious of everyone else in the room staring at him. Concentrate, he scolded himself.

He’d been aware of several inventions claiming to make illuminating gas from coal, but none that had been patented. “Is this Mr. Melville the same one who has the patent for the gas light?” he wondered, one eyebrow arching up, his interest piqued.

Nodding, Olivia added, “And the gasometer.”

Leaning back in his chair, Michael regarded Olivia with even more appreciation. I’m going to marry this girl, he thought, reminded of the decision he’d made the year before. “Indeed,” he whispered. He turned his attention to Harold. “We may be able to get what we need for the next venture,” he said sotto voce. How much more profitable their coal and smelting ventures would be if they could capture coal gas as a by-product! At some point, all of England could be lit by coal gas—indoors and out.

“Great minds think alike, Mr. Cunningham,” Harold answered with a smirk. “I believe we have our next venture.”