The Heirs of the Aristocracy 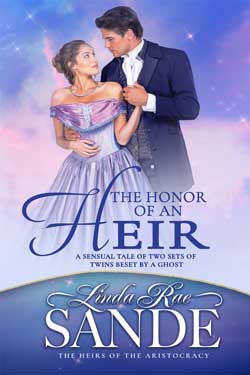 The Honor of an Heir

They swore never to marry. But will the right suitors melt their hearts?

Fiercely independent and daughters of a wealthy countess, twins Dahlia and Diana have no time for husband-hunting, despite their mother's pleas. But when the ghost of their late father makes an appearance, he takes it upon himself to guide the girls into marriage – even if his presence will scare off potential suitors.

Caught cheating in one of their university courses, twin brothers Anthony and Andrew's dreams of a Grand Tour are shattered when their father pulls the plug on their allowances. They had hoped to put marriage off as long as possible – but with their father breathing down their necks, they have no choice but to face the daunting task of a lifelong commitment. There's only one problem – although one of the brothers wants to marry, the other feels as if he's being forced to wed for money.

Brought crashing together by fate and aided by the girls' late father, both pairs of twins must learn to see through their differences and get along. But marriage is no easy decision, and it will take more than a miracle to convince these sisters to tie the knot.

Are the twins a match made in Heaven? Or will the girls' independence and the brothers' lack of a fortune serve to drive them apart?