"The Widowers of the Aristocracy" Book 3 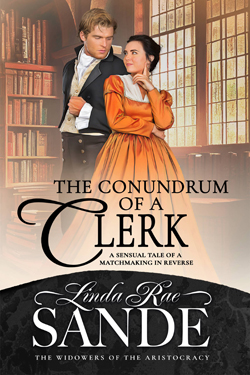 The Conundrum of a Clerk

When widower and bank clerk Theodore Streater discovers his late mother was not only the headmistress of Warwick's Grammar and Finishing School, but also its owner, he's in need of someone to run the rather lucrative enterprise. He turns to the woman who helped him regain his position at the bank after he lost an arm fighting in Belgium. His best friend's wife, Elizabeth Bennett-Jones, Viscountess Bostwick, still runs her charity, Finding Work for the Wounded. She is sure there's an applicant who would be perfect as headmistress of her old school.

Having lost her position as an operative with the Home Office—her slight limp from a gunshot wound is hard to hide—Daisy Albright is at a loss as to what to do next. She could return to her father's home. The Duke of Ariley would like nothing more than to have his oldest illegitimate daughter under his protection until a suitable marriage can be arranged. But after several years of handling her own affairs away from the aristocracy, Daisy is determined to retain her independence.

So when Viscountess Bostwick informs her she has a position in mind, Daisy immediately pays a call on the new owner of Warwick's to apply. Poor Teddy Streater has no idea what he's in for when he hires the ex-spy to run the finishing school. He would prefer to court the comely lady who seems prim and proper, but what woman wants to marry a man with only one arm? Perhaps he should be in search of a mistress. Trouble is, he can only imagine Miss Albright in the role in The Conundrum of a Clerk.

"You're going where?" James, Duke of Ariley, asked as a footman set a plate of eggs and a rasher of bacon in front of him. He had already finished a cup of coffee and was about to start another when Daisy brought up her plans for the day.

"Warwick's Grammar and Finishing School," Daisy replied, wondering if her stepmother ever ate breakfast with her father. A copy of The Times, newly ironed and half-open before the duke, had held his attention until Daisy entered the breakfast parlor.

"You are aware your sister no longer holds her position there," he half-asked, his gaze taking in her smart hairstyle and carriage gown. Seeing her like this had him understanding just how she could pass as a spy for the Home Office—no one would guess she wasn't anything other than a prim and proper daughter of the ton, albeit an older one.

"I am. But I should have liked to have been a visitor to her classroom when she taught arithmetic." Daisy paused, knowing he would eventually ask as to her reason for visiting the school. Instead of waiting for the inevitable question, she relented and simply admitted why she had requested a conveyance for the morning. "Lady Bostwick believes I could be headmistress of the finishing school."

James set down his coffee cup in its saucer, the fine china clattering a bit as his brows furrowed. He had wondered why the Bostwicks had paid the call the day before. He had intended to ask Daisy when she appeared in the nursery, but the delight in her eyes at meeting her younger brother had him thinking instead of how happy he was the two had finally met.

And then, when Helen had given up her hold on Rose so that Daisy could hold the babe, he had fought back tears. The expression of joy on his eldest daughter's face as Rose opened her eyes and smiled would stay in his memory for the rest of his days. Surely some sense of maternal longing would settle in her breast. Some desire to marry and have one of her own.

He need only find a man worthy of her. He rather doubted she would manage it on her own.