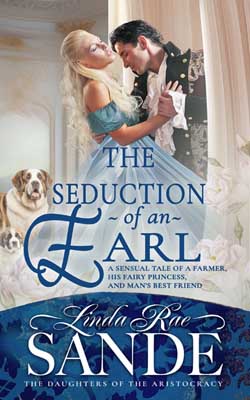 The Seduction of an Earl

They never married for love. But will their feelings grow into something more?

Henry Forster only ever loved one woman. But there's a problem – she's a farmer's daughter, and his family would never allow him to marry a girl with a status as low as hers. Now as an Earl in need of an heir, Henry is forced to seek a wife – but he's determined to keep his lover by his side.

Hannah Slater realized a long time ago that men never love their wives. She made peace with that knowledge, and her desperate need for a child drives her to accept Henry's no-nonsense courtship and marriage proposal. She doesn't care about his mistress, as long as he gives her what she wants.

But as they settle into married life, an unlikely spark begins to simmer between the pair. Henry comes to admire his new wife's bold attitude and business sense, and Hannah is forced to re-think her attitude about married men. But when tragedy strikes, will the couple be driven into each others' arms? Or will they end up forever stuck in a loveless marriage?

If you love charming historical Regency romance novels with unlikely lovers, a happily-ever-after, and a beautiful 19th-century England backdrop, then you'll adore Seduction of an Earl by bestselling author Linda Rae Sande. Grab your copy now!

“How do you take your tea, my lord?” Hannah asked as she lifted a cup and saucer.

“Gisborn,” Henry stated emphatically. At Hannah’s widened eyes, he wondered if he had erred in insisting she use his name so soon after their introduction. “No sugar, a bit of milk,” he added. He dared a glance in the dog’s direction. “Will Harold be joining us, milady?”

Hannah was pouring the milk and didn’t see the glint in Henry’s eye as he asked about the dog. She did wonder how he knew her pet’s name. Did Father talk about Harold with him? She lifted her gaze to his as she handed him the tea. “I’m sure he would love to. That is, if you were not asking in jest.”

Henry smiled. “I was not,” he answered with a shake of his head. “Unless I have taken his chair, in which case I should like the opportunity to move to another before we invite him.”

Smiling at his comment, Hannah turned her attention on her pet. “Would you like a biscuit, Harold?”

The Alpenmastiff raised his head in surprise. A very small but deep ‘woof ’ erupted before the beast raised his entire body off the floor, a move that seemed to take a great deal of effort and at least two or three whines before he lumbered over to Hannah’s side. He appeared to notice Henry for the first time, but, not sensing any danger to his mistress, he pulled his haunches under him and sat up as straight as his bulk would allow.

“May I?” Henry asked as he pointed toward the dog’s treat. Hannah regarded her guest with a bit of uncertainty. “I ...I suppose.”

Lifting the biscuit from the plate, Henry rose from the chair and walked over to the dog. Standing directly in front of Harold, he allowed his eyes to make contact with the dog’s. They were large, brown eyes, rather expressive despite the overall look of boredom the rest of his expression seemed to convey. His huge black nose was surrounded by a white snout that featured a collection of black freckles. Beyond that, his body was covered in brown fur which extended to a white band of fur around his entire neck. The rest of his body seemed covered in the brown fur, except his front legs, which were quite white, as if the dog had been recently bathed. Henry wondered if there was a copper tub anywhere in London large enough to accommodate such a huge beast.

Henry lowered the biscuit until it rested on top of the dog’s rather wide snout. Harold stared at him with lazy eyes, as if he had done the trick a thousand times and was bored by it. Henry returned to his chair and sat down. “Now, Harold!” he commanded. Harold dutifully tossed the biscuit into the air with an upward shake of his nose and caught the treat in his mouth as it came down. For a few seconds, a crunching sound emanated from the animal.

Hannah’s mouth dropped open before one of her hands could cover it. “How did you ... how did he know how to do that?” she asked in surprise. “I... I didn’t know he knew that trick!” She stared at Henry for several seconds. “I haven’t taught him how to do it!”