"The Widows of the Aristocracy" Book 3 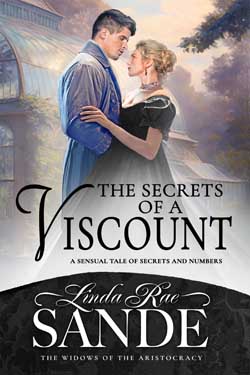 March 2018 Ind'Tale Magazine 4 stars
"The Secrets of a Viscount" is a lively story of unlikely lovers falling in love and the journey they travel to get there. The descriptions of the characters are divine; it is easy to imagine the appearance of them all...It is hardly believable that a man could ask a girl on the street to marry him and have the relationship come to full fruition, but it makes for a great tale! The secrets revealed make this a twisted story indeed. A true page-turner, "The Secrets of a Viscount" is very difficult to put down.

The Secrets of a Viscount

Nothing makes a man more lonely than his secrets. The same might be said for women.

Godfrey Thorncastle, Viscount Thorncastle, has a secret he’d rather not tell anyone, including the woman for whom he has held a candle for over twenty years. Elise Burroughs Batey, the widow of Lord Lancaster, has had enough of marriage, but pining for the chance at motherhood, she may just have to consider Godfrey’s proposal.

If he can just get it right.

Meanwhile, Adam Comber, Viscount Breckinridge, has finally decided it’s time to marry—or perhaps a pending deadline has him motivated to find a bride. Why not the very first woman he spots from the bow window at White’s? He may not be the best at mathematics, but he's pretty sure she's got his number.

As an arithmetic teacher and dance instructor at a finishing school, Diana Albright has a secret she’d rather the ton not learn, especially the rather handsome man who has just informed her she will be his bride. What a bounder! Of course his proposal is just a lark.

Does the viscount really intend to take her as his wife? Some numbers just don't quite add up in The Secrets of a Viscount.

Elise allowed a sigh as her attention returned to the statue of Cupid. “I don’t yet know how I’ll respond to Godfrey’s note,” she commented.

Sighing, James, Duke of Ariley, leaned forward and allowed his elbows to rest on his knees. “He loves you, Elise. He always has. He needs an heir. You want children... ” He allowed the sentence to trail off, as if he had run out of reasons she should marry the only man she had ever loved.

“James Burroughs!” Elise admonished, her shock changing to a grin when she saw how a smile split his face.

“I apologize,” he replied, his seriousness suddenly returning. “Marry him, Elise. Have some babies, and make me an uncle.”

“You already are,” she countered.

“I’ll like your children better than your sisters’,” he replied, annoyance evident in his features.

Elise blinked. “So will I,” she murmured.

They sat in companionable silence for a few minutes before the beginning strains of a waltz sounded from the ballroom. “I promised my duchess this dance,” James said as he suddenly stood up. “Don’t stay out here all night, Elise, or there will be a note about you in the next issue of The Tattler,” he warned. Then he turned and disappeared on the flags leading back to the ballroom.

The Tattler, Elise thought with a sigh, not bothering to watch her brother’s retreat. What could the gossip rag claim about her other than she had never appeared in the Weatherstone ballroom the entire night? She may as well have stayed home. But then, if she had, Cupid wouldn’t have made the shot that seemed to help make up her mind regarding a certain marriage proposal.