"The Widows of the Aristocracy" Book 1 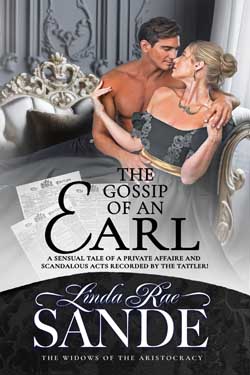 The Gossip of an Earl

The Earl of Fennington has a secret identity—that of Mr. Pepperidge, editor of London's premiere gossip rag, The Tattler. While attending a garden party as Fennington, he meets and falls in love with an earl's daughter. The attraction is mutual, for despite knowing better, Lady Emelia allows him to kiss her behind a hedgerow. Who will know but them?

When the earl asks permission to marry Emelia, her father denies him, requiring him instead to court Emelia for eight weeks. He's only allowed to see her once each week, however. Desperate to spend more time with her, Fennington devises a scheme in which he'll be able to do just that, but in disguise. Emelia will have to meet Mr. Pepperidge in the park once a week to provide him the on-dit she hears whilst paying calls in Mayfair parlors. That, or he'll print the news of her kiss with Fennington in The Tattler!

Meanwhile, Jane Vandermeer, Dowager Countess of Stoneleigh, is considering a move to the Continent—a year of mourning after a loveless marriage has left her wanting something more. When her long lost love, Andrew Burroughs, appears at Lord Weatherstone's ball and informs her he'll be spending the evening—and hopefully the rest of his life—with her in London, the future is suddenly looking bright. That is, until The Tattler prints a report of Andrew kissing Lady Jane in the gardens during the ball.

Hurt and angered, Jane goes about trying to discover the truth while Andrew is seeing to the restoration of the childhood home he hopes to share with Jane.

With mistaken identities ruling the reports in The Tattler and a new Gossip Goddess sharing news of obscure aristocrats, is it any wonder the members of the ton love to hate gossip? Or do they really love The Gossip of an Earl? The Tattler knows!

“You wish to what?” Mark Comber, Earl of Aimsley, had barely leaned back in his dark leather chair when he suddenly pitched forward and regarded his visitor with surprise.

“I wish to marry your daughter.”

The older earl waved the other earl into the chair across from his desk. “Since when?” The two words were filled with suspicion, as if Aimsley couldn’t decide if Felix Turnbridge was playing a trick on him, or if the man was serious. He had been good friends with Aimsley’s oldest son, and heaven knew Adam was a troublemaker if there ever was one.

Felix inhaled slowly and wondered how much to admit. He pulled his chronometer from his waistcoat pocket and gave it a glance before replying, “Fifteen... make that sixteen minutes ago.”

Aimsley House was only a few doors down from the Weatherstone mansion, after all.

Aimsley slowly leaned back in his chair, never allowing his stare to leave the Earl of Fennington. “And just what happened sixteen minutes ago?”

Exhaling the breath he’d been holding, Felix decided honesty was best. What’s the worst that could happen? It’s not as if Aimsley could deny him. “I kissed Lady Emelia. During the garden party at Lord Weatherstone’s mansion.”

Waving a dismissive hand, Aimsley made a dismissive sound. “Is that all? Jesus, Fenn, you had me thinking you claimed her virtue,” he complained. “Don’t be thinking you have to offer for her hand over a ...” He paused as his eyes suddenly widened. “You haven’t proposed to her already, have you?”

Felix frowned. “Of course not,” he said with a shake of his head. “I wanted your permission first.”

Aimsley seemed to give off an air of relief. “Well, don’t fash yourself. I’m not going to hold a peck against you, especially one that took place in Weatherstone’s gardens.”

Narrowing his eyes, Felix wondered at the man’s unexpected response. In fact, Mark Comber’s cavalier attitude about his daughter—his only daughter—being kissed—in public, no less—had Felix feeling a bit of anger just then. “It wasn’t just a peck, Aimsley! I kissed her. Several times. Thoroughly,” he added, rather proud of how he was owning up to his unexpected rakish behavior.

After all, he chided others for the very same. Publicly, although not in his own name. Wrote damning articles and published them on a weekly basis. The earnings from his avocation were the very reason he could now afford to take a wife.