"The Sisters of the Aristocracy" Book 2 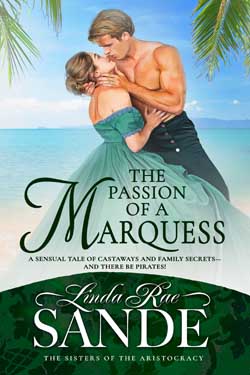 Although Sande's novel seems to follow the usual romance tropes at first, the characters elevate it to something more, making this a delightful and unexpected page-turner. The romance grows gradually, although not without its obstacles, which keeps the pages moving briskly to a satisfying conclusion. Little details of life in upper-class British society are nice touches. Readers of the previous novels will be rewarded with mentions of their favorite characters.

SUMMARY: Samantha is at the cusp of spinsterhood at 23. Resigned, she agrees to take a trip with her aunt to the Continent as a distraction. Onboard the ship is the Marquess of Plymouth, and his ill-temper results in her learning a secret that turns her life upside-down. When a storm pitches Samantha and Ethan off the ship and into an uncertain future, the deserted island they discover becomes a sensual paradise. But upon their rescue, a misunderstanding may result in the two never seeing each other again. (LINDA RAE SANDE, Jan. 2015, 328 pp., $11.99)

From the May-June 2016 BTSeMag, page 42: I liked the original storyline, the characters, and everything was well described, you could see it playing in your mind as you read. And you won't want to quit reading for long. Highly recommended for historical lovers. -- Cyrene

The Passion of a Marquess

They say you learn from mistakes ... but what if they're not your own?

After four Seasons and no prospects, Lady Samantha is resigned to life as a spinster. Her aunt, Caroline Fitzsimmons, Viscountess Chamberlain, has another option in mind—she insists they set sail to Italy for a tour she hopes might allow her charge to meet and marry a European aristocrat.

His mines having suffered a multitude of disasters, Ethan Range, Marquess of Plymouth, is determined to secure a recent invention from an Italian count to alleviate the danger of fires. He's none too happy to discover Lady Caroline traveling on the same ship as he is to Rome. He knows her secret and is rather incensed she's been able to hide Samantha's true past from the ton.

While taking a late-night stroll on deck, Samantha is confronted by the scowling marquess. Incensed by his assertion that Caroline is really her mother, Samantha barely has time to slap the man before a sudden storm sends a wave of water onto the ship, washing them both overboard.

Forced to save each other, the two end up as castaways on a deserted island in the Mediterranean. Although they face perils a plenty during the week they're stranded, they have far more to fear from one another than from hunger, weather, and pirates. Can the two overcome their circumstances and realize the mistakes of the past are not their own? Or will their week on the island lead to more turbulence? The heart may be the best life preserver in The Passion of a Marquess.

The marquess glanced again at the sky, a frown replacing his passive expression. “Jesus,” he breathed, noting how the stars had been replaced by low clouds. Was that rain he smelled? The sky to the west suddenly lit up when a lightning bolt flashed near the horizon.

Curious as to what had the man’s attention, Samantha turned to peer in the direction of his gaze, spanning the horizon. The breeze, suddenly blustery, picked up in intensity. “What is it?” she asked as she tried to make out what had captured the attention of the marquess. Glancing up, she realized she couldn’t see a single star in the sky. The ship, until then seeming to float on its course, suddenly rose as a swell passed beneath it.

“We need to get below deck,” Lord Plymouth announced suddenly, tearing his gaze from whatever had him spellbound only the moment before.

“What is it?” Samantha asked again as she continued to stare to the west. The ship lifted again, this time higher, so that the main mast wavered above them. She had to take a step to the right to keep her balance, even though the marquess had taken her upper arm in a grip that would surely leave a bruise.

The sky to the west lit up with blue-white intensity as a lightning bolt seemed to strike the ocean.

Struggling to keep her balance as she made it to the companionway, Samantha was about to descend when a wave crashed over the rail and sent seawater washing over the deck. Several barrels suddenly lost their footing as the water lifted them and sent some over the side of the ship. When the wave of water hit the wheelhouse, it rolled back over the deck, grabbing Samantha and nearly upending her. Seawater poured down the companionway as the ship suddenly tilted.

Lord Plymouth kept his hold on Samantha, jerking her away from the stairs just as the water would have caught her and probably sent her head-first through the opening. “Hang on!” he managed to get out as he gripped a railing.

Samantha reached for anything to grab onto, one gloved hand grasping the marquess’ lapel while the other tried to hang onto the railing.

The curse had Samantha following the Lord Plymouth’s startled gaze.

Although she was fairly sure she didn’t put voice to her own curse, Samantha Fitzsimmons would remember it for all the days of her life. For directly in front of them, a wave of monumental proportions descended on the ship. The roar was deafening. The impact of the water was far more than her tenuous grip on the railing could withstand. Within a fraction of a second, she was forced to let go and move her hand to the only body she could hang onto.

That of the Marquess of Plymouth.