"The Widows of the Aristocracy" Book 2 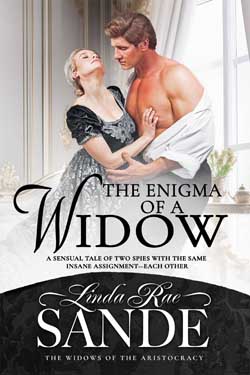 I thoroughly enjoyed this second book in the Widows of the Aristocracy series. I have not read the first book in the series– even though it sounds wonderful – but I didn't need to read it in order to enjoy this one. I always enjoy Sande's characters, their humor, their flaws and their path to love. This one is well written, well-plotted and populated with likable characters – well – except for the hero's sister, but she hardly has any page time – Oh – and the villain, he isn't very likable. I also enjoy that the book isn't populated with Dukes.

Adonis Donald Truscott is a war hero who suffers from what I guess we would now call PTSD. He just gets lost in his own thoughts on occasion. This tendency to 'space out' (not a period correct term) has caused his sister to think he needs to be in bedlam. ** Note – said sister seems to be a bitc* and I'm glad she is featured very little in the book. Adonis is a sweet, sweet man who made a promise to his commander just before his commander died. Adonis was badly wounded and was in the hospital for almost a year after that battle and the promise. Now, he's back in London to fulfill his promise and to see his boss – the spymaster.

Adonis is afraid that he'll be dismissed from being a spy because of the problems he has left over from that horrendous battle and its outcome. So, he's pleased when he is given a task to do. He knows it is a test, but he is glad to have even that much. There is a traitor in their ranks. The spymaster is sure of who it is, but Adonis is to find out for sure.

The promise Adonis made to his commander was to look after and protect his wife (widow) when he gets back to London. Adonis pictures an older, frumpy lady (one wonders why) and is surprised to find out that she is none of those things and he is very, very attracted to her. He knew that nothing could develop between them because of his affliction, but that didn't keep him from desiring her or just desiring to be near her. Their first meeting in the museum is cute and funny – and then he secretly steals into her bedchamber each night to sit in the corner and watch over her as she sleeps.

Lady Lydia Barrymore is now the widow of a Viscount. Lydia is also a spy, she decodes and analyses messages and codes, but she has been inactive and in mourning for the last year. She's ready to get back into her work, so she visits the spymaster. She's given an assignment that just floors her – she is to assess the sanity of Adonis and to see that he comes back to normal because the spymaster needs him. She is to do whatever it takes to see to his sanity – even seduce him and marry him if necessary.

Adonis drives Lydia insane – he says inappropriate things at the wrong time, he turns up in places he shouldn't be, and he's sneaking into her bedchamber at night. But, strangely, she is drawn to him and would miss him if he stopped sneaking in. She knows she's not supposed to know that he sneaks in – but – she awakened one night and realized he was in her room – sitting quietly – watching over her.

Their journey through traitors, puzzles to solve, unkind relatives and into love and their HEA is a lovely thing and I really enjoyed the read!

The Enigma of a Widow

Flirting with madness can takes it toll … but flirting to stay sane? Priceless!

Having lost her husband in the Battle of Ligny, Lady Lydia Barrymore is determined to resume her work for the Foreign Office when her mourning period is over. She’s spent a year solving puzzles and assembling dissected maps to maintain her skills. Her first assignment has her perplexed, though—do what she must to help a fellow operative recover his sanity. Although she finds the man rather beautiful, Sir Donald has also proved most annoying.

Newly knighted Adonis Truscott returned from the Continent with a tendency to get lost in his thoughts. His frequent episodes of staring into space have his sister claiming he’s a candidate for Bedlam—and he’s not about to argue. He doesn’t always remember where or when he was when he recovers, but he remembers he made a promise, and he’s determined to keep it.

A promise to provide protection for Lydia, whether she wants it or not.

When a puzzle’s directions require Lydia to solve it with the help of Adonis, she discovers the man harbors secrets that may be impossible to reveal. With her own sanity in jeopardy—a year-long mystery involving her late husband may be more annoying and dangerous than her errant knight—Lydia will have to piece together a solution that suits them both in The Enigma of a Widow.

The thought of viewing artwork created more than a millennia ago excited Lydia. That someone had the skills to cut and carve marble into such detailed works of art meant the ancestors of humanity weren't the barbaric creatures she had been warned of whilst still in the schoolroom in Merriweather Manor.

For every Spartan, there had been an Athenian, after all.

Viewing statues of mostly naked men would have been nearly impossible if there were too many others with her in the Gallery. On a day such as this, she had the room to herself.

She didn't exactly study the statues, but surreptitiously surveyed them as she slowly walked around each one. She found them intriguing. Men nowadays weren't so very different from those of two- or three-thousand years ago, she decided, although she only had experience with the two from current times. Perhaps the Greeks were more beautiful. Youthful, mayhap. Or perhaps they only depicted younger subjects because it was difficult to carve wrinkles into marble.

The reclining man before her was definitely youthful, his body barely muscled, his face relaxed as if he were sleeping. She could almost feel his soft breaths as he lay there, one arm raised above his head and angled so its hand was atop his curly hair whilst the other was bent with its hand resting beneath his chin. He wasn't entirely naked but wore a cape tossed over one shoulder, and the folds of a skirt were strewn about his mid-section. His feet sported sandals with leather ties wrapped about his thick ankles.

Awareness of another's presence in the gallery had the hairs on the back of her neck reacting.

The sensation of a soft breath wafted over her shoulder again, this time bearing the slightest hint of sandalwood and spice cologne. Stiffening where she stood, Lydia realized someone was standing directly behind and to her left. A man, no doubt, given the scent of his cologne. She was about to put voice to a complaint, but he put voice to a most audacious claim before she had a chance.

"I've been told I look exactly like him," the male voice whispered, almost in her ear.

Lydia carefully stepped to the right and turned slightly, amazed to see that, yes, the intruder did indeed look exactly like Adonis. Or Endymion sleeping on Mount Latmos, if one remembered the label mounted next to the block of marble. He was also impeccably dressed in a superfine navy topcoat, an elaborately embroidered waistcoat in red and gold, and buckskin breeches that, at the moment, left absolutely nothing to the imagination as far as his muscular thighs and the bit of anatomy that was located just above them. A quick glance at his tasseled boots, and Lydia was sure she could see her reflection. One of his gloved hands was pressed onto the top of a cane handle decorated in ornately-patterned silver plate while the other held what appeared to be a sketchpad.

"You do, in fact," she murmured, her gaze darting back and forth between the statue and his living twin. "Are you related, perhaps?" she asked with an arched eyebrow.

"My mother must have thought so. She named me Adonis," he replied with an equally arched eyebrow.