"The Brothers of the Aristocracy" Book 3 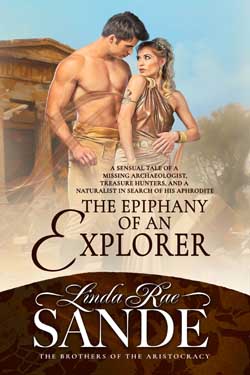 With each novel a great read in itself, The Epiphany of an Explorer (The Brothers of the Aristocracy Book 3) continues strong from the first in the series and yet remains original in concept and delightful in style. With sweet, touching romance wrapped in snappy dialogue and fascinating historical backdrop with authentic era feel, author Linda Rae Sande's novel is a serious literary work of beauty, depth and complexity.

With compelling protagonists and a host of charismatic supporting characters, author Linda Rae Sande’s attention to the plot is meticulous. The Epiphany of an Explorer (The Brothers of the Aristocracy Book 3) is a fictional historical romance in the classical style that is sure to reward the author for her talent of narration with a wider audience. Highly recommended to the fans of fictional historical romance genre.-- Enas Reviews

The backdrop of the story is beautifully written and one almost feels as though they too, are in the tropics. There is much detail in this work, so it is easy to imagine what the characters look like as well as what kind of attitudes they show... This was a very unique story in that it included spies, pirates, the ton, and wrapped it all up as the story of a simple expedition of a Naturalist. This is the third book in a series, but works well as a standalone novel. Nicely done! -- Ind'Tale Magazine Belinda Wilson

The Epiphany of an Explorer

A man only gets one chance to find his Aphrodite … but what if she finds him first?

When archeologist Dr. Stewart Jones, a duke, goes missing and is feared dead while searching for an important Greek artifact, explorer Harold Tennison, Earl of Everly, is pressed into service by fellow members of the Royal Society to find him. Since Harry has already planned an expedition to the Cyclades to search for rare birds and flowers, he sets off for the Aegean to begin his quest.

On his last visit to Delos, Harry was blessed with a visit from a young woman—his very own version of Aphrodite rising from the sea to regard him with an arched eyebrow and a simple question that left him so discombobulated, he could barely speak.

Born of a Mykonian mother and a British duke, Lady Estelle isn't particularly comfortable in either world. With her father's recent disappearance and no prospects for marriage, Stella may end up stranded on Mykonos. She spends her days assisting her uncle in his hunt for Greek treasures he can sell to visiting Europeans. At night, she remembers the bespectacled earl who nearly broke her foot during a waltz back in London.

When Harry arrives on Mykonos to begin his hunt for the duke and to resume his own research, he'll have to learn far more about mythology, antiquities, and Greek goddesses than he bargained for. The search may be worth it, though, but only if he ends up with his very own Aphrodite in The Epiphany of an Explorer.

“I don’t suppose you could at least pretend you’re just a bit surprised at meeting me again,” Stella murmured.

Harry found the peach shade a rather fetching color on her just then, the early morning light adding its own shades of pink. “You think I should have reacted differently?” Harry asked then, wondering why she seemed annoyed with him. He couldn’t help it that she had been the one to appear out of almost nowhere, nearly naked as she stood in the knee-deep water of the Aegean Sea all those years ago. The fact that he made no mention of it was merely because a gentleman didn’t intentionally embarrass young ladies.

“It isn’t as if we’ve never met before,” Stella countered, her ire more evident.

Harry stared at her, trying to decide if he should admit to having seen her half-naked or continue to pretend as if they had never met. But something about the way she was regarding him gave him pause. “What are you talking about?” he hedged.

Stella gave him a quelling glance. “I should have known you wouldn’t recognize me,” she said with a sigh. “Perhaps I should be relieved you do not.”

Harry’s brows arched up. “Recognize you? How could I when we’ve never met before?” he countered, a hint of annoyance in his voice.

Perhaps he should have admitted to having remembered her half-naked appearance.

Is that what this is about?

Stella angled her head to one side, wondering if she should admit to having met the man in a setting other than the Aegean Sea. At this point, what could it hurt? “Ah, but we have, Mr. Tennison. You danced with me at my come-out ball.”

Harry stared at the woman, stunned by her words. “Come-out ball?” he repeated. She’s English, he remembered, trying to imagine her golden skin a much paler shade and her hair in a bun atop her head. Despite his brief attempt at doing so, he couldn’t conjure an image that fit anyone with whom he had met in England. “That’s rather unlikely,” he finally whispered, shaking his head from side to side. “I’m rarely in London, and when I am, I …”

“Don’t attend entertainments, I know,” Stella finished for him. “But you did that night. It was your last night before you were to leave for a trip to India. I remember you quite clearly because you were woolgathering. You stepped on my new slippers three times during our one dance. Ruined them, you did.”

And nearly broke my foot.