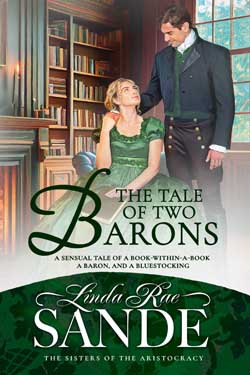 The Tale of Two Barons

What will she discover when she reads between the lines?

Jeffrey Althorpe is in need of more income for the struggling Sommers barony. As a peer of the realm, he's not allowed to work, but if he's able to earn money from a book he's written – anonymously, of course - no one will be the wiser. A dowry would be easier, but then he would have to find a wife willing to marry a baron.

While her brother, the Earl of Everly, is away on one of his lengthy expeditions, Lady Evangeline is left behind in London to spend her days creating exquisite embroideries and reading books. She's about to buy The Story of a Baron at the Temple of Muses when Lord Sommers suddenly appears. He's intent on buying the very same book, but there's only the one copy.

Desperate to discover what changes his publisher might have made to his story - without letting on he's the author - Jeffrey suggests they read it together. Evangeline's sterling reputation could use a bit of scandal, she decides, and so she agrees to Lord Sommer's proposal.

As the two read The Story a Baron, Evangeline realizes some of the characters and settings are just a bit too familiar. And a bit too close to home. Was she the inspiration for the baron's secret love, a bold, brash woman whose reputation is in tatters? With her own reputation suddenly in question, Evangeline finds her life imitating art. How can the book have a happy ending when she wishes she'd never purchased The Story of a Baron?

Lord Sommers took a quick glance over the three rows of shelving, realizing almost immediately that the book he sought was not among the titles on display. He was about to turn and take his leave of the shop when he realized there was a wide space between the books, a space through which he spied a young woman.

A young woman who was lit by sunlight streaming in from a reading room window.

A young woman who appeared as if she were an angel.

A young woman who was resting the spine of a book on one forearm whilst she opened it with her other hand.

A young woman who appeared to be reading the very last page of the book.

A young woman who was now turning to the front of the book and apparently reading the first page!

It was then Jeffrey caught sight of the title page. A very brief sight, for the words, The Story of a Baron, flashed by in a blur.

She was reading the very book he sought!

How dare she? Didn’t she realize that by reading the end, she was spoiling it for herself? That by reading the beginning, she was ... well, she was doing the very thing he’d seen at least a half dozen other people do whilst they shopped for books, so he couldn’t fault her for that, he supposed. But she was reading his book!