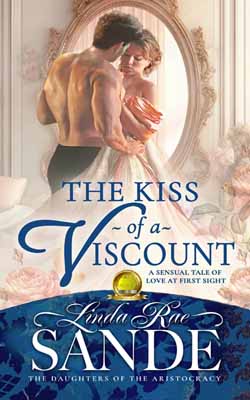 The Kiss of a Viscount

George Bennett-Jones has just inherited his uncle's viscountcy. His politically astute mistress, Josephine, insists he must find a bride. Through a series of lessons, she instructs George on the finer points of meeting and courting a woman of the ton – and even has one in mind for him.

Lady Elizabeth has recently founded a charity using her own funds and a novel approach to securing positions for returning soldiers who are otherwise unable to find employment. One of George's friends is the first beneficiary of Lady E’s charity. He tells George that Lady E bribed a bank manager to rehire him for his old position as a clerk. “You’d like her,” the friend says, his words an understatement if there ever was one. For when George spies the woman dancing with the Earl of Trenton, George experiences a case of love at first sight. But the auburn-haired daughter of a marquess is quite sure the earl will offer for her hand, and she has every intention of accepting – even if his kiss has left her feeling as if she were kissed by her best friend’s dog!

When Elizabeth mentions her horrible first kiss during the ball’s supper, George implies there is an art to kissing, innocently offering to replace her poor first impression with a proper kiss. Intrigued, and unaware that George is a titled gentleman, Elizabeth accepts his offer at the next ball. George is more than happy to accommodate her. His kiss has the daughter of a marquess so stunned, so amazed and so aroused, she requests that he demonstrate the pleasures that can be had in a marriage bed. Knowing he has only one night to court the woman who has captured his heart, George sets out to prove himself while promising he will leave her virtue intact.

Will the evening of pleasure he has planned for Elizabeth convince her to accept his hand in marriage? Or simply leave her with a vivid memory of what she will be missing should she accept the earl’s marriage proposal? The lessons of a mistress prove invaluable in The Kiss of a Viscount.