"The Brothers of the Aristocracy" Book 1 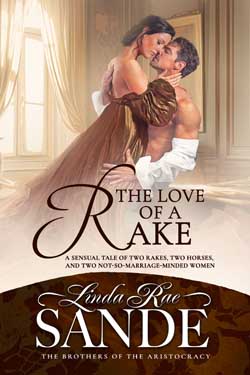 Read the 5-star review at The Romance Reviews

Holy matrimony! Tis the season in Regency London for rakes of all ages to succumb to marriage fever! Three clever, amusing, and sexy stories of lovestruck noblemen determined to put an end to their bed-hopping ways, and capture their true loves. This book was a treat!

Two love stories, two rakes, and their quest for love. I loved the way the book goes back and forth between the two couples, and how all of the other characters interacted with each other making the story fast paced, interesting, and full of romance.

The Love of a Rake

Everyone has plans … until something—or someone—comes along to change them.

At the age of thirty-five, Randall Roderick, Marquess of Reading, decides it's time to trade in his life as the ‘Rake of Reading' for the life of a married man. Trouble is, his reputation precedes him, and he's not particularly attracted to the milk water misses who make up the eligible ladies of the ton.

His counterpart, Charles Goodwin, Earl of Wakefield, is only twenty-five and enjoys his life as a rake far too much to consider marriage. A visiting prostitute may change his mind on the matter, though, if only because he wants to do the right thing.

When the Earl of Norwick's skittish cousin, Constance, meets Randall in the park, she's intrigued by the gentleman she thinks is merely a well-to-do cit with a fascination for horse racing, but she's only in London to find out what's become of her inheritance. She's determined to return to her home and horses in Sussex to live the life of an independent woman.

Her counterpart, Eleanor Merriweather, is in London for her come-out with a dream to marry her perfect knight, but having been duped by a brothel's madame upon her arrival, she suddenly finds herself completely and thoroughly ruined.

When the lives of these four are suddenly upended by their chance meetings, the events of two nights and two days will prove that it takes a bit of horse sense to get on the right track in The Love of a Rake.

“Do you ever feel guilty? Given our past behavior, I mean,” Randall Roderick, Marquess of Reading asked as he reached for his brandy. One of the footmen at White’s had just set it down on the table next to his chair. He waited for Charles Goodwin, Earl of Wakefield, to do the same before holding up his glass in a salute.

The earl matched the marquess’ move and sniffed his brandy before taking a sip. “To what behavior do you refer?” he asked, allowing the footman to light his cheroot. For a moment, he wondered if the marquess had him confused with his brother, Sir Arthur. The damn gossip rags were at it again, suggesting the man had been seen in the company of other men, and not for the purpose of gambling or whoring.

Randall gave Charles a quelling glance. “Our rakish behavior, of course. I never thought it would ... interfere with my life as much as it seems to have done this past week,” he explained.

Charles regarded the marquess for a moment, his gaze intercepted by a swirl of smoke from his cheroot. Once the smoke had cleared, he allowed a shrug. “I’ve done nothing for which to feel guilty,” he replied. “Unlike you, I pay for my tumbles, and I haven’t had the comforts of a widow in ... well over a year,” he added, his voice lowering so only the marquess could hear him. “And then it was only because she trapped me in Lord Weatherstone’s library and insisted on it during his annual ball.”

His eyebrow’s dancing, Randall gave a snort. “What? Did she put a gun to your head?” he teased.

The earl frowned. “Not the head you’re thinking about,” he replied with a wince. “And I rather like both of them, so I did as I was told. I left quite sure she was satisfied, although we did have to be quick given the queue waiting outside to use the room.”

The Marquess of Reading shook his head, wondering if he had been in the line to which the earl referred. Goodness! Lord Weatherstone’s balls were always the best attended and probably because they always promised a willing woman or two with whom a tryst could be arranged in the gardens.

Except for this last ball, Randall suddenly remembered. “I was kissed by a virgin at Weatherstone’s last ball,” he murmured, his gaze taking on a faraway look. “Something that’s never happened before and probably never will again.”

Charles straightened in his chair, intrigued by Randall’s claim. “Because you plowed her in the garden? By the fountain?” Charles countered, his amusement suddenly disappearing when he caught sight of Randall’s somber face. The man looked positively sorrowful. Another moment, and Charles was sure the marquess’ bright eyes would shed a tear or two. “Good God, man! What did you do to her?” he asked, struggling to keep his voice low despite his alarm.

The question seemed to bring the marquess back to the present. “Nothing. I did nothing,” he replied with a shake of his head. “Well, except speak of marriage. I proposed. I even made a promise to her that I would keep a vow of fidelity should she accept my offer.”

Charles stared at Randall for a full ten seconds before his eyebrows drew together into a deep frown. “Where is the Rake of Reading and what have you done with him?” he asked in a menacing voice.