"The Sisters of the Aristocracy" Book 3 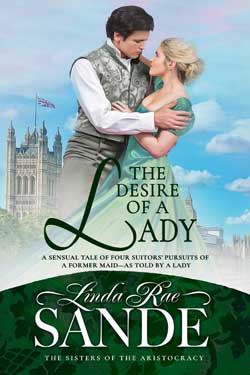 The Desire of a Lady

Being a maid was much simpler than being the illegitimate sister of an earl. Lily Harkins has learned that lesson the hard way. Now, she has not one, but four aristocratic suitors. Her brother will expect her to choose one. Trouble is, she doesn't want any of them. The handsome clerk she recently met, however, is another story entirely. She'll just have to convince her brother that marrying a commoner wouldn't be a huge mistake. And she knows just how she's going to do it…

William Overby is perfectly happy with the middle-class lifestyle his job affords him. He was, at least. Until he met her. The lovely Lily is everything he could ever want in a wife. It's just his unfortunate luck that she's also completely out of reach for someone of his station. He knows he should stay away. And yet…he doesn't. He can't…

Can Lily and William find a way to bridge their opposite worlds and take a shot at happily ever after? Or will the dictates of an unforgiving society overtake the lure of forbidden love and The Desire of a Lady?

Sarah Wellingham, Countess of Trenton, speared her fingers through her husband’s butter blond curls. “Why, give me a glance with those beautiful blue eyes and toss me a sovereign and I’ll give you a tumble right here and now.”

Gabriel Wellingham, Earl of Trenton, straightened at his desk and regarded his wife with widened eyes. “What?” he replied in shock. “It didn’t cost me anything last night!” he claimed in mock dismay.

Grinning in delight, Sarah shrugged. “It’s those blue eyes and that blond hair,” she whispered as she ruffled up his hair with her long fingers. A gold filigree bracelet dotted with sapphires encircled the wrist at the base of her hand. Although the piece of jewelry was more appropriately worn at balls and the opera, Gabriel had insisted she wear it everyday. “You’ll need a reminder you’re a countess now, and no longer a commoner,” he had said when he first wrapped it around her wrist.

Sarah tore her eyes away from the winking blue jewels and settled them back on her husband’s blue eyes. “And speaking of your very best trait, you must know your sister is receiving a good deal of attention, and not all of it because of those blue eyes and blond curls of hers,” she said with an arched eyebrow. “She was mentioned again in The Morning Chronicle.”

The earl rolled his eyes and sighed. “I am a bit concerned about that,” he admitted, “Which is why I’m considering sending the coach to London for her. It would do her some good to spend some time in the country.”

Sarah nodded her understanding, not about to tell him she had already sent a letter to her sister-in-law with the invitation to visit Trenton Manor. “I fear those who pay her such attendance don’t necessarily have her best interests at heart,” Sarah said as she took the chair across from her husband’s desk. Although she had only been his countess a bit more than a year, Sarah had settled into her role much like she had when she agreed to manage the Spread Eagle Inn.

An earldom, as it turned out, was very much like a business.

Gabriel frowned. “You think they mean to ruin her and... what?” he asked in alarm.

Allowing a sigh, Sarah leaned forward and lowered her voice. “Ruin her and marry her,” she clarified. “She’s a very pretty girl, but there is another reason all the young bucks, and some not so young ones, are interested in taking her as their wife.”

His blue eyes widening in alarm, Gabriel shook his head. “Her dowry, do you suppose?” he asked finally.