"The Heirs of the Aristocracy" Book 4 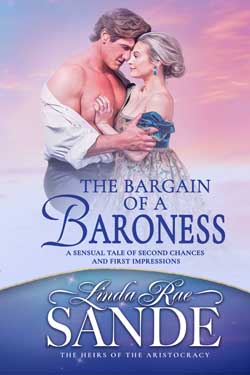 The Bargain of a Baroness

Separated by fate. Bound by a bargain. Is there any hope for a second chance love?

When his one true love marries another man, Graham Wellingham abandoned his hopes of romance to pour his attention into business. His hardened heart has left him immune to the charms of wealthy socialites… but he hasn’t forgotten the promise he made to his love Hannah all those years ago.

Hannah Simpson Harrington has straddled two conflicting words her entire life. Once married to a future earl after her dream husband never proposed, his untimely death has left her a dowager with a too-mature-for-his-own-good sixteen-year-old son. But when she and Graham stumble upon a second chance for love, the possibility of a fairy-tale happy ending hovers just beyond their reach.

Meanwhile, a mysterious young woman captures the attention of Hannah’s twin brother Henry. There’s only one problem – a relationship between a housemaid and the grandson of a duke is forbidden. But Harry holds a glimmer of hope… and he’s willing to take a scandalous risk for the sake of love.

Perfect for fans of riveting second-chance love stories with enchanting characters, a beautiful Victorian backdrop and plenty of passion, The Bargain of a Baroness is a romance tale you won’t want to miss.